“you were both hunter and hunted; the shadow of your thoughts was the beast which killed you.” - Robert Holdstock 'Lavondyss'- Second novel of the Mythago Wood series


Well, I'm really looking forward to home time today. I have just discovered, somewhat belatedly, the Mythago Wood Cycle by Robert Holdstock. When I say belatedly I mean by a good 35 years, but whose counting, and to be honest at my age any new/old literary discovery that gets the synapses buzzing is welcome.

I've long been a fan of Science Fiction, both the 'old school' Ray Bradbury et al, and the not so new kids on the block, like China Melville* and Iain M. Banks. But Fantasy, well I'm picky.  Too many Dragons, too many ancient Kings and my attention wanders. Though Brian Aldisses  Helliconia Trilogy keeps me quiet in the depths of winter, so I guess I'm not totally opposed to the basic tenets of the Fantasy Genre. 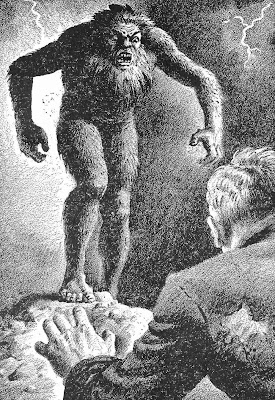 Anyway, back to Mythago Wood. The general setting is 1940's England, and a long forgotten tract of ancient forest.  However this forest functions rather like The Tardis, once you enter time is distorted, and the forest itself becomes far larger. It is populated, at different moments, and in different ways, by the spirits of the ancient English/Celtic/Roman 'heroes', as they appeared, in all their various manifestations, throughout time.  The basic premise being that figures such as Queen Boudicca or Robin Hood are part of our unconscious collective memory, that they have always existed, and always will.

The story revolves around the interaction of one family, namely a father and his two adult sons, who each in turn become embroiled in the 'vortex'. Of course at the heart of this is an inter-generational sexual jealously, revolving around the flame headed young maiden, which is a little sad, but then it is 'Fantasy' and Holdstock was writing in the late 70's.  And to be fair, that is a timeless theme, fitting for a story that revolves around figures from legend and mythology.

Mythago Wood won the World Fantasy Award for Best Novel in 1985, and it was well deserved.  It really is a brilliant example of mythic fiction, and is recommended to any reader willing to enter a complete new world with an open mind. I would also recommend Mythago Wood to non Fantasy readers who love Celtic history and Mythology in general, as it offers a valid interpretation of the role of mythology in human affairs.


* Yes, yes, I know, he's a Fantasy writer, but it's of the 'New Weird' school, and I suspect is read by people who would never dream of working their way through a David Eddings collection.

** The illustration for this post is, unfortunately, not from the actual book, the 'real' cover being bog standard Fantasy cover art circa 1985.  It is actually
a 1930s illustration to a story by John Buchan, of half-humans inhabiting a remote part of the Scottish Highlands, I suspect Buchan's The Watcher By The Threshold And Other Tales.

To my mind it is a perfect reflection of the Mythago Wood story, which inhabits both the fantasy realm, and the real world of 1930-40's England. I have borrowed the image via Uncanny UK

"Leaked from the secretive Ryhope Archive, this fragment of 8mm film from April 1935 apparently shows several anomalous structures (geistzones) in the heart of Ryhope Wood. The cameraman and the provenance of the film are not known."
- youtube

Posted by Siobhan McCormack at 17:31