"The most startling incident in my life was the time I discovered myself to be a poet, which was in the year 1877"

A short time back we purchased 3 banana boxes of books from an elderly couples estate. For the most part they were the books of an era, and in less than optimal condition, that unfortunately condemns them to a one way trip to the dump. Unless I happen upon them. Very occasionally these sorts of boxes may include a few wee gems, often times books with no particular monetary value, but the sort of thing that brings a sense of joy to my day. 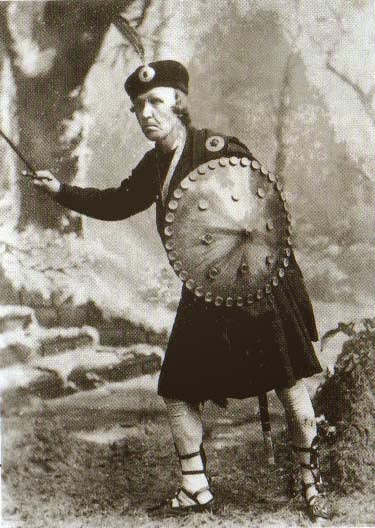 So I'm sorting through piles of Irish Plays and theatre commentary that no one still breathing and sober could possibly want to read, and I came across a very nice set of 3 paperbacks, in such nice condition, and with a crisp tweed cover print. I sigh deeply, thinking 'Oh Good Grief..more turgid Scottish Poetry'. And how right I was.  In actual fact I was holding some of the worst poetry ever written*, the poetic gems of Sir William Topaz McGonagall, Poet and Knight of the White Elephant, Burmah

Of course McGonagall will be well known to fans of Spike Milligan, and bonus points to any Harry Potter fans who get the reference. However for those unfamiliar with his works, please follow the various links throughout this Blog Post.


An Address to Shakespeare

Immortal! William Shakespeare, there's none can you excel,
You have drawn out your characters remarkably well,
Which is delightful for to see enacted upon the stage
For instance, the love-sick Romeo, or Othello, in a rage;
His writings are a treasure, which the world cannot repay,
He was the greatest poet of the past or of the present day
Also the greatest dramatist, and is worthy of the name,
I'm afraid the world shall never look upon his like again.
His tragedy of Hamlet is moral and sublime,
And for purity of langucge, nothing can be more fine
For instance, to hear the fair Ophelia making her moan,
At her father's grave, sad and alone....
In his beautiful play, "As You Like If," one passage is very fine,
Just for instance in fhe forest of Arden, the language is sublime,
Where Orlando speaks of his Rosilind, most lovely and divine,
And no other poet I am sure has written anything more fine;
His language is spoken in the Church and by the Advocate at the bar,
Here and there and everywhere throughout the world afar;
His writings abound with gospel truths, moral and sublime,
And I'm sure in my opinion they are surpassing fine;
In his beautiful tragedy of Othello, one passage is very fine,
Just for instance where Cassio looses his lieutenancy
... By drinking too much wine;
And in grief he exclaims, "Oh! that men should put an
Enemy in their mouths to steal away their brains."
In his great tragedy of Richard the III, one passage is very fine
Where the Duchess of York invokes the aid of the Divine
For to protect her innocent babes from the murderer's uplifted hand,
And smite him powerless, and save her babes, I'm sure 'tie really grand.
Immortal! Bard of Avon, your writings are divine,
And will live in the memories of you admirers until the end of time;
Your plays are read in family ciFcles with wonder and delight,
While seated around the fireside on a cold winter's night.

*J.R.R. Tolkien, C.S. Lewis and other Inklings considered a certain  Amanda McKittrick Ros. to be the worst poet ever. And looking at her poems, and prose, I am inclined to agree. However, despite a sterling effort on Mrs Ross part, her personality lacked a certain level of delusion and grandeur that Queen Victoria’s unofficial Poet Laureate possessed.....in bucket loads.


“Speak! Irene! Wife! Woman! Do not sit in silence and allow the blood that now boils in my veins to ooze through cavities of unrestrained passion and trickle down to drench me with its crimson hue!”